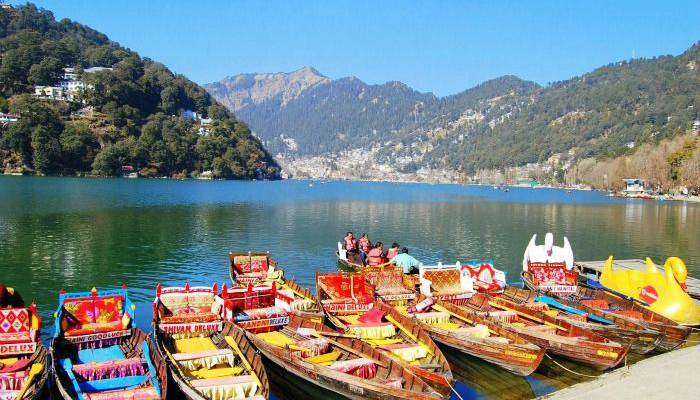 Nainital Lake -The mesmerising lake is a natural freshwater body, situated amidst the township of Nainital in Uttarakhand State of India, tectonic in origin, is kidney shaped or crescent-shaped and has an outfall at the southeastern end. Nainital is most popular hill station of Kumaon district. Nainital is most popular hill station of Kumaon district. It is famous for its Naini Lake located at the centre of the town and several other lakes of nearby areas. The trees and bushes have grown in the region (lake’s basin) with their botanical and common Indian names (in parenthesis) are reported to be: a) Quercus incana Oak (Banj); b) Aesculus indica (Pangar or Horse chestnuts); c) Juglans regia (Akhrot or walnut), d) Populus ciliata(Hill Pipal, a sacred tree); e) Fraxinus micrantha (Ash tree or Angu); f) Platanus orientalis (Chinar); g) Rubus lasiocarpus (Hisalu); h) Rosa moschata (Kunj or Musk rose); i) Berberis asiatica (Kilmora);j) Cupressus torulosa (Surai or Himalayan cypress); k) Rhododendron arboreum (Buruns); Cedrus deodara (Deodar); l) Salix acmophylla (Weeping Willow); and m) Pinus (Pine). The fishes found in the lake are generally carped Mahseer, (the Hindi name of mahāsir, mahāser, or mahāsaulā used for a number of fishes of the group), also hill trout and the mirror carp which breed several times during one spawning season during May to September. Nine species of birds and nine species of animals have been recorded in the Nainital district. The mesmerising lake is most famous for its wonderful scenic beauty which is a hotspot for family picnics. Boating, long evening walks and endearing interactions with ducks are some of the things that are a must-do whilst visiting this glittering lake. You can also seek the blessings of Goddess Naina Devi at the Naina Devi temple which is also situated near the Naini Lake.  A pretty lake that once a European man fell in love with, Naini Lake today serves as a major tourist spot for people from all over the country.